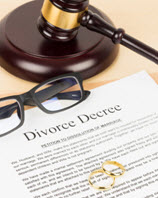 Connections between former spouses can last long beyond the final divorce order. While the marriage may no longer exist, complying with ongoing obligations that require both action and cooperation post-divorce can become strained over time, often due to changes in circumstances for a party, or complications in the relationship between the former spouses . Regardless of the reason, the law does require an individual under the direct order of a court to remain in compliance or face significant consequences. Simply choosing to stop responding is not a prudent option and can lead to a motion to hold the former spouse in contempt. While rare in the family law context, contempt can result in jail time, but will more likely bring the imposition of fines and attorney’s fee awards as punishment for a violation. Contempt claims should not be ignored, and in many instances should be vigorously challenged, particularly if they are being unfairly or arbitrarily requested by a former spouse. Most discussions on the topic of contempt orders in family law cases focus on using them to enforce alimony, child support, or parenting time arrangements, but rarely touch on the other side – what the accused party should do to avoid the court finding contempt. A discussion of how to defend against these claims will follow below.

There are two types of contempt that can come into play in legal cases: civil and criminal. Civil contempt is the one primarily seen in family law cases, and is generally initiated by a former spouse when an order related to the divorce is violated. Civil contempt is designed to compel compliance, rather than exact punishment, so the procedure is geared toward giving the accused a chance to explain and rectify the situation. Consequently, a hearing must be held and the claims of noncompliance must be proven through testimony and other kinds of evidence. This hearing gives the accused party the opportunity to respond and tell the judge why he/she failed to follow court orders. The extra expenses of divorce can hit an individual hard, and figuring out how to remain financially afloat, while also meeting these obligations, can be difficult. Job loss, illness, and injury can all derail any ability to meet these obligations, and cause a former spouse, even one with good intentions, to fall behind. This does not mean the other party will understand these struggles, or be willing to mutually work out a plan. The key issue to responding to a contempt motion is showing the noncompliance was not intentional and willful, but a result of unexpected and unavoidable circumstances. In other words, is the former spouse able to comply, but choosing not to do so, or is he/she truly unable to meet the demands of the court order because of other issues? Further, civil contempt also includes purge provisions, which allow a party to avoid the consequences of contempt by performing certain acts, usually the payment of a specified amount of money.

Conflict between former spouses can push some to make false accusations about acts that violate court orders, more commonly seen in parenting disagreement and domestic violence situations. Whether someone paid money is generally black and white to establish, but issues related to child custody and domestic violence injunctions can be more subjective and open to interpretation. For example, there may be claims a parent is cutting off communication between the other parent and child, or that a former spouse violated a no-contact order related to domestic violence. There can be multiple explanations for why a person took certain actions, and an experienced family law attorney should be consulted about how best to respond to these claims to obtain a good result.

The pressures of divorce can last for a long time after everything is finalized, and if you have concerns about ongoing obligations, or need to respond to a contempt motion, contact the attorneys at the Donna Hung Law Group. Our team in Orlando can help you navigate these tricky issues, and help keep the situation from spiraling out of control. Contact us at (407) 999-0099 for a consultation.