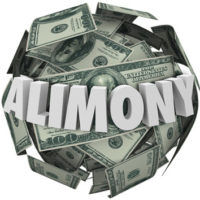 Amidst all the concerns of divorce, the tax consequences of property settlements and the payment of alimony are not commonly on a spouse’s radar. Property settlements can result in significant tax liability if not correctly structured, thereby reducing the real value of the acquired assets. When it comes to alimony, the party who pays the former spouse support is currently permitted to deduct this expense from income on his/her federal tax return. Conversely, the party receiving support must report the monies received as income. While exceptions to the rule do exist, this is the general treatment of alimony for tax purposes. Being able to deduct alimony payments from one’s income taxes can relieve the financial burden on the payor, especially if the obligation to pay this support is set to last a number of years. However, the need to report alimony as income or deduct payments from federal income taxes may be gone when the proposed tax reform bill produced by the House of Representatives is finally passed into law. The current version completely repeals both deductions and reportage as income of alimony payments from the federal tax code, which would significantly impact the financial consequences for both spouses in divorce. However, understanding the current law on the tax consequences of alimony should not be ignored. A discussion of the general effect of alimony on the tax obligations of divorced parties, and how the structure of alimony payments needs to be factored into the final settlement to avoid untenable consequences, will follow below.

The Structure of Alimony Payments

In addition to the amount of alimony paid, the structure of how payments are made is also important, especially for the party receiving support. Courts are empowered to order a spouse to pay alimony periodically, in a lump sum payment, or through a combination of both. Typically, alimony is paid on a monthly basis, even if the support is temporary, so that both parties can factor this money into their budgets. For payors with steady incomes, periodic payments are usually the most efficient method to implement alimony. However, requiring lump-sum payments is advisable in certain situations, particularly if there is concern periodic payments will not be made. While receiving everything up front sounds good on the basis of sheer numbers, taxes will be due for the entire amount in one year, instead of spreading the liability over a period of time. The tax consequences of a lump-sum payment could leave the receiving party in dire straits, and is an issue that should be discussed with a divorce attorney to ensure this arrangement makes sense.

The payment of alimony is often a contentious issue in divorce, and can be difficult to reasonably settle without input from an experienced divorce attorney. Orlando’s Donna Hung Law Group understands how confusing this area can be, especially under the rules at play in Florida, and are available to answer your questions as you move through the divorce process. Contact the office at (407) 999-0099 to learn how these attorneys can help you.